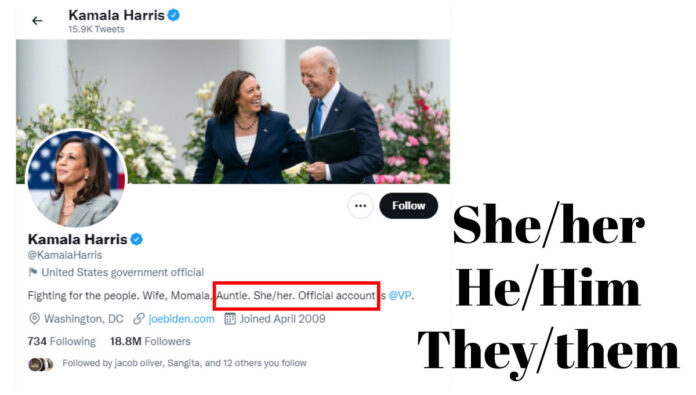 Peoples are started pronouncing them as a She/her, He/Him, They/them on social media and now it’s becoming trend to put tags like She/her or He/him in Instagram bio, twitter profile description, LinkedIn job profiles and resumes and at the end of emails. So, let’s understand why peoples started this trend on social media.

“She/her, He/Him, They/them” it a particular gender specific pronouns which is used to refer their self as girl/women, boy/men or either women/men. It’s indicates the other peoples to treat them as they pronouns them. It’s mostly used by a transgenders and queer community to refer their self as a specific gender. Also, some cisgender peoples are putting it to tell peoples about them.

Meaning of “She/her/hers” is that if a girl is looks like a boy from her behaviour and looks. But she wants to pronouns her as a She/her/hers and treat her like a girl not boy.

Meaning of “He/him/his” is that if a guy is looks like a girl from his behaviour and looks. But he wants to pronounce him as a he/him/his and teat him like a boy.

Meaning of “They/them” is that a person is not sure about his/her pronouns so he/she use this tag to tell peoples that they can pronouns them as per their choice and treat them as a boy/girl.

On social media platforms “She/her, He/Him, They/them” in trends and peoples now stated putting this into their Instagram bio, twitter profiles, also in job profiles of LinkedIn or resumes and at the end of email messages because they are specifying their gender to other peoples and which pronouns to use when speaking about them.

Most probably it is use by transgenders and queer community peoples to specify their gender. Because transgenders have a different gender identity and expressions then their actual birth sex. For example, if a person who is girl by born but she looks like as a boy so at the first instant you got confuse about her that what you pronouns her or him? So, if you pronouns her as a “he/him” so she feels bad about it. So, she puts “She/her” tag in her Instagram bio, twitter profile, job resumes to tell peoples that she is an actually a girl and pronouns her as a she/her.

Cisgender peoples are putting these tags in their profile because sometimes they also miss gendered by others. For example, a girly guy, mannish looking woman, a pun names peoples will probably misgender you all the time.

Also, some straight peoples are putting this tag in to their bio to support transgenders. These pronouns are not indicating the persons sexual orientation. So, when someone put “She/her, He/Him, They/them” in their bio you can’t consider them as from LGBTQ+ community.

Why “She/her” is in trend on twitter and social media?

“She/her” is in trends on twitter and social media because transgender girls are putting that tag to specify their gender and telling people to pronouns her as a “She/her” and treat her as a girl.

Because transgender girls have looks and behaviour like a boy, so you don’t miss gender her from her DP and photos and pronouns her as a boy. So, she puts “She/her” tag in her Instagram bio.

“She/her” in trends why?

“She/her” in trends because transgender girls are started putting this tag in their profiles and bio to tell people to pronouns her as a she/her and some straight peoples are also supporting by putting this tag. So it’s in trends.

Because transgender boys want to pronouns them as a He/Him and treat them as a boy, so they are putting this tag in their bio to let to know people about them.

what does it mean when someone puts, “she/her”?

someone puts “She/her” in bio that means pronouns them as a she/her and treat them as a girl.

what does it mean when someone uses, “she/her”?

transgender girls are using “She/her” tag in her bio and profile because they wants to specify their gender and likes to treat as a girl.

Girls with “She/her” in bio is straight?

Yes, obviously girls with “She/her” tag in bio of Instagram and twitter profile are straight because it not indicating their sexual orientation it’s only shows how to pronouns them.

No girls with “She/her” tag in Instagram bio and twitter profiles are not feminist and representing any king of feminist community and campaigns.

Transgender girls are using this ““she/her” to tell peoples how to pronouns and treat her.

No not every on using “She/her” in bio are belongs and supporter of LGBTQ. It only use to tell people about how to pronouns them and treat them.